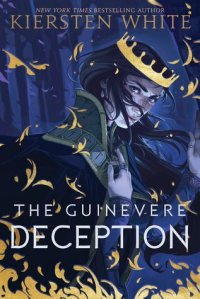 Book Description: There was nothing in the world as magical and terrifying as a girl.

Princess Guinevere has come to Camelot to wed a stranger: the charismatic King Arthur. With magic clawing at the kingdom’s borders, the great wizard Merlin conjured a solution–send in Guinevere to be Arthur’s wife . . . and his protector from those who want to see the young king’s idyllic city fail. The catch? Guinevere’s real name–and her true identity–is a secret. She is a changeling, a girl who has given up everything to protect Camelot.

To keep Arthur safe, Guinevere must navigate a court in which the old–including Arthur’s own family–demand things continue as they have been, and the new–those drawn by the dream of Camelot–fight for a better way to live. And always, in the green hearts of forests and the black depths of lakes, magic lies in wait to reclaim the land. Arthur’s knights believe they are strong enough to face any threat, but Guinevere knows it will take more than swords to keep Camelot free.

Deadly jousts, duplicitous knights, and forbidden romances are nothing compared to the greatest threat of all: the girl with the long black hair, riding on horseback through the dark woods toward Arthur. Because when your whole existence is a lie, how can you trust even yourself?

Review: I’ve been a big fan of White’s work since I read her re-imaging of the life of Vlad the Impaler, gender swapping the main character and creating a tension-filled and deeply stressful (but fantastic) trilogy. From that reading experience, when I heard of this book, a re-imaging of the Camelot story from Guinevere’s perspective, I knew the author was up to the task! And I wasn’t wrong!

Guinevere arrives at Camelot with a mission: to marry Arthur. But that’s only the beginning of her story, for she’s not really Guinevere at all, but a protector sent by Merlin to watch over Arthur himself from all magical threats. While well-versed in magical protections and wards, Guinevere soon learns there is much more to this task than simply being on the look-out for threats to the king. She must actually be the queen, as well, something she feels much less suited for. And as she begins to peel back the layers of the mysterious Camelot and its political maneuverings, she starts to see that there is more at stake than she had thought, and that even she, the woman sent to protect Arthur, may not know the whole story.

This book surprised me in many ways, not least of all in its protagonist herself. We soon discover that Guinevere is not a reliable narrator. I love it when books can pull off an unreliable narrator approach as it opens up so many new doors for discovery as the story unfolds. Here, Guinevere herself isn’t aware of her own unreliability, and in many ways, the reader begins to put together pieces before she does herself. We know that she is an envoy sent by Merlin to protect Arthur. But we don’t know much more than that. It’s only as the story begins to move forward that the layers in Merlin’s plots become clear, and Guinevere begins to suspect larger things at play than a simple protection task.

She’s a very sympathetic character, a necessity for one of fiction’s most vilified female characters. Like she did with Lada Dracul, White builds open and adds to the original character blocks in such a way that the character is easy to understand and root for. Beyond that, the author doesn’t hold back from re-imaging all of the characters involved. If you suspect you know the role that any given familiar name will play, prepare to be surprised. I saw a few of these twists coming, but there were definitely one or two that took me by surprise. Luckily, one of the biggest twists towards the end was one of those surprises.

This was also one of the books I referenced a few weeks ago that has a love triangle that I miraculously didn’t hate. I guess I shouldn’t have been surprised since White also included an unconventional love triangle in her “And I Darken” series. But, again, here I was very pleased with the direction this love story ended up taking. Again, knowing the author’s way, I won’t pretend that this book really establishes any end game as far as the romance goes, but for this book, I was satisfied. It’s always nice to be reminded that even much-detested tropes can be done right by a skilled writer.

The story also doesn’t answer all the mysteries it sets up. There are still a bunch of questions on the table, and I have my own theories about Guinevere’s past and the role she will play going forward. The stage has been set with magical mysteries, old villains and new, and a main character who has only now realized just how under-prepared she really is. I can’t wait to see where it goes from here!

Rating 8: Another excellent twist on a classic tale from Kiersten White!

“The Guinevere Deception” is on these Goodreads lists: “Best Retellings of fairytales, legends and history” and (just for kicks) “Covers With Beautiful Art.”

Find “The Guinevere Deception” at your library using WorldCat!