Things in the Twin Cities are very tough right now as summer is starting. But just know that we are safe, though we are also heartbroken and angry like many in our community over the events of the past week. Though it’s hard sometimes to turn our brains off from these things, we do have some books that we’re looking forward to this month. And along with that, please take a look at some of the links we’re providing to see how you can possibly help our community and George Floyd’s loved ones. Thank you. Say his name: George Floyd. Black Lives Matter.

We Love Lake Street: An organization that is raising money to help clean up and rebuild the damage done to small businesses on Lake Street, one of the neighborhoods hardest hit. Many of the people in this area are BIPOC, including the business owners.

Migizi Fundraiser: A local organization for Indigenous Youth burnt down and hopes to rebuild.

Neighbors United Funding Collaborative: A group that is raising money to give to small businesses in the Midway neighborhood, an area that was hard hit in St. Paul.

Northstar Health Collective: Medics that are on site during protests as well as community health activists.

Minnesota Freedom Fund: A local group that raises money for bail and bond to put up for those who have been arrested with a focus on social justice and immigration.

Why I’m Interested: I really enjoyed Caruso’s original “Swords and Fire” trilogy. It featured a strong heroine, an interesting magic system, and strong world-building. So I was excited to see that she was coming out with a new series so quickly. Even better, it is one that is set in the same world, but this time focuses on a young woman who heralds from Vaskandar, the wild, nature-based magical kingdom that was the predominant villains of the first trilogy. What’s more, it sounds like the story will be less about a conflict between Vaskandar and Rivera, like the original trilogy was, but will be introducing some new magical elements and characters. I’m super excited to see what it has to offer!

Book: “The Empire of Gold” by S.A. Chakraborty

Why I’m Interested: “The Daevabad Trilogy” has been my favorite current fantasy series for several years. The first two books each ended up high on my “Top 10” lists each year, and I’d be hard pressed to think of a better debut fantasy author on the scene right now. Chakraborty seemingly came out of nowhere and blew me away with an incredible, original fantasy story feature a complicated Daeva society whose roots and conflicts go back thousands of years. And this is the conclusion. I have to say, I’m equally terrified as I am excited. The last book ended with the such a high stakes cliff-hanger and so many complicated threads all tangled up that it’s impossible for me to see a way out of this that won’t just be tragedy all around. I’m prepared for some sadness, but please, please, let my dear Nahri come out of it ok. 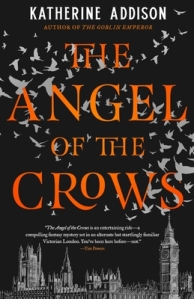 Book: “The Angel of Crows” by Katherine Addison

Why I’m Interested: I obviously love both historical fiction and fantasy, so I’m all the more intrigued when the two are combined. In this version of 1888 London, humans and paranormal creatures, such as vampires, werewolves, and even angels, share the streets. So this time, when history makes its turn and Jack the Ripper arrives on the scene, the story will play out very differently. The last “Jack the Ripper” story I read was in the latest installment of the Veronica Speedwell mystery series and, wow, was that a disappointment. Jack the Ripper was LITERALLY a passing figure and the entire book was a pretty big let down. So, the stakes are high for this one coming off that. The fact that its incorporating all of these fantastical beings is definitely a new twist, especially angels which are less common than vampires and werewolves. I’m really curious to see what angle this story takes on the most famous serial killer there ever was. 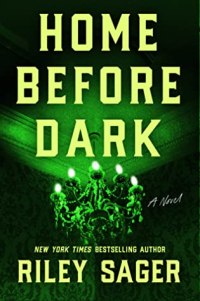 Why I’m Interested: Riley Sager hasn’t steered me wrong yet! He’s definitely up there with other favorite thriller authors right now, so you know that I was very happy to see a new book coming out. And this one takes on an Amityville-like tale of hauntings. Or maybe fraud. Maggie’s father wrote a memoir about the time he and his family spent in a haunted house. The book was a runaway hit, but was met with skepticism as well as love. Now Maggie is an adult, and doesn’t really want to associate with that tale as she has no memory of the things her father claimed happened. But after her father’s death she inherits the old house, and hopes to renovate it before she puts it up for sale. And when strange things start happening while she’s there, she has to wonder if maybe he wasn’t lying after all. SIGN. ME. Up.

Why I’m Interested: We have another book that is exploring the idea of the true crime podcast! When Anna moves to a new town for a job, the community is still reeling from the disappearance of local girl Zoe Spanos. Anna’s resemblance to Zoe is uncanny, and she starts to become obsessed with the case. Her obsession implicates her when Zoe’s body is eventually found. Teen podcaster Martina, whose show is all about Zoe and her disappearance, thinks that something else is up, and vows to find the truth. This really sounds like it’s going to tap into my love for both YA thrills and true crime podcasting, so I’m VERY excited for it.

Why I’m Interested: I can safely say that we are BOTH interested in “Mexican Gothic”, here on the blog.  My reasoning is that I enjoyed Moreno-Garcia’s last book, “Gods of Jade and Shadow”, and I love me some Gothic creepiness. So a book that is quoted as being a ‘terrifying twist on classic gothic horror’ by an author I’ve enjoyed is absoLUTELY going to be of interest to me. When Noemí, a debutante in 1950s Mexico, receives a call for help from her newly married cousin, she rushes to an isolated house in the country called High Place, where her cousin lives with her mysterious new husband. Noemí finds herself in the presence of not only a potentially dangerous aristocrat, but also in a house that seems menacing, and perhaps hiding secrets. Moreno-Garcia’s writing style is already very enjoyable, and it definitely sounds like a fresh take on a classic genre!