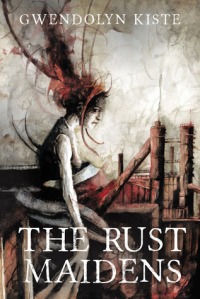 Book Description: Something’s happening to the girls on Denton Street.

It’s the summer of 1980 in Cleveland, Ohio, and Phoebe Shaw and her best friend Jacqueline have just graduated high school, only to confront an ugly, uncertain future. Across the city, abandoned factories populate the skyline; meanwhile at the shore, one strong spark, and the Cuyahoga River might catch fire. But none of that compares to what’s happening in their own west side neighborhood. The girls Phoebe and Jacqueline have grown up with are changing. It starts with footprints of dark water on the sidewalk. Then, one by one, the girls’ bodies wither away, their fingernails turning to broken glass, and their bones exposed like corroded metal beneath their flesh.

As rumors spread about the grotesque transformations, soon everyone from nosy tourists to clinic doctors and government men start arriving on Denton Street, eager to catch sight of “the Rust Maidens” in metamorphosis. But even with all the onlookers, nobody can explain what’s happening or why—except perhaps the Rust Maidens themselves. Whispering in secret, they know more than they’re telling, and Phoebe realizes her former friends are quietly preparing for something that will tear their neighborhood apart.

Alternating between past and present, Phoebe struggles to unravel the mystery of the Rust Maidens—and her own unwitting role in the transformations—before she loses everything she’s held dear: her home, her best friend, and even perhaps her own body.

Review: I honestly couldn’t tell you where I heard about “The Rust Maidens” if you asked me. I THINK that it was on a Goodreads list at one point, but I can’t tell you what the theme of said list would be. Probably horror, but still. All I know is that it came in for me at the library, and when I picked it up I thought to myself ‘oh yeah….’ The reason I say that I only think that it was probably on a horror list but am not certain is because “The Rust Maidens” is one of the most unique horror stories I’ve read in the past year or two, based on the themes that it decides to take on along with some good old fashioned body horror you might see in an early Cronenberg film.

“The Rust Maidens” is a tale of decay, both the decay of the human body and the decay of a once prosperous part of Americana. In Cleveland, Ohio in 1980 Phoebe is a working class teenager living in a working class neighborhood. The community has put on a face of togetherness and wholesome American values, while the livelihood of a number of the men, the mill, has been experiencing more and more uncertainty. Phoebe’s story is told during the summer of 1980, and also almost thirty years later when she has to return to the neighborhood after years of grief and guilt. Spunky and rabble rouser Phoebe of 1980 is a stark contrast to the jaded and affected Phoebe of later life, and the changes over the years, which seemed to catalyze with the Rust Maidens, are now very apparent in her old neighborhood. The fact of the matter is that “The Rust Maidens” is a story of degeneration, not just of the afflicted girls, but of the community around them, and the decay of the American Working Class once the 1980s hit. While the Rust Maidens are slowly wasting away, Denton Street and the blue collar workers who live there are facing yet another potential strike at the mill. Phoebe’s family and neighbors believe that the promise of that job will always be there for them, even as the union gets continuously beaten down and the specter of the upcoming Reagan years lingers. Decay takes on many meanings in this book, and Kiste isn’t afraid to point out that when people are scared, scapegoats are sought out. And the Rust Maidens are the perfect scapegoats. It’s fully intentional that Kiste made the neighborhood turn on a bunch of scared and ‘sick’ teenage girls, given that they had already turned on Phoebe before for daring to not conform. The aggression comes from all sides, from deadbeat boyfriends to angry old men to women who think that girls should be and act a certain way. The metaphors are real, and the feminism in this horror story is angry and apparent.

And on top of the themes, the body horror is VERY real. The descriptions of the Rust Maidens as their bodies start to change and wither away/transform is unsettling at best, and revolting at it’s worst. But on top of that, it’s also very upsetting on an emotional level to see these girls be maligned and feared, and to see how some of them react to the revulsion towards them. Being extra sensitive to such things right now, one of the Rust Maidens is a new mother, and her child whisked away from her because of her condition. She is constantly drawn to the baby, who is placed with the father and his family even though he’s a complete lout. The descriptions of the mother’s pain, even when she was starting to become something else, had me crying pretty handily, so thanks for that, Gwendolyn Kiste!

“The Rust Maidens” is a unique and fascinating horror novel. Those who like their body horror with a little bit of metaphor should check it out post haste!

Rating 7: A bleak and angry examination of decay and the expectations of teenage girls, “The Rust Maidens” serves body horror and feminism in heaping, scathing doses.

Find “The Rust Maidens” at your library using WorldCat!