Back for 2019, here is a list of some more favorite beach reads! “Beach read” is a very fast and loose term for books people read over the beautiful summer months when we really should be outside “doing things” but are instead reading…maybe outside. Some people see these months as an opportunity to slog through long classics (we’re looking at you “Moby Dick”) before the busy-ness of of the fall starts up, but for the sake of this list, we’re limiting our choices to stand alone, mostly feel good books (though there’s some obvious leeway here for Kate’s horror tastes!) that could be easily brought along on vacations. So, still a very loose definition, but hey, we had to start somewhere! We will select one title for each of the genres we most read. 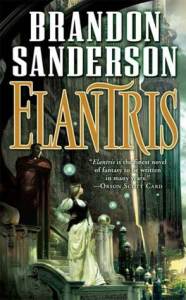 As well as right lengthy fantasy epics, Brandon Sanderson also has a few excellent standalone works. This is one of his earlier writings, and the book that really solidified him as a favorite author for me. Off the back of the “Mistborn” trilogy, I wasn’t sure whether Sanderson was the real deal, or whether that series had been lightening in a bottle. But “Elantris” is marvelous all on its own. It proves that you can still include detailed world-building, complicated magical systems, and fully fleshed out characters all in one, stand alone fantasy series. It tells the tale of the magical city of “Elantris,” once a wonder of the world, now a ruin, haunted by those infected by an incurable disease that comes on suddenly and dooms its carriers to a short life of exile. Princess Sarene and Prince Raoden are both fun characters to follow, but the slowly-revealed mystery behind the doom of Elantris is the real draw of this story.

Science Fiction Title: “The Best of All Possible Worlds” by Karen Lord

Honestly, I had forgotten all about this title until I was researching options for this list. But once I rediscovered it on my Goodreads “read” shelf, I immediately remember how much I enjoyed it and now want to nab a copy to re-read. The story is a bizarre mix of an anthropologic travelogue and the answer to the oft-asked fanficttion question “What would a romance really look like between a Vulcan and a human?” Of course, they aren’t actual Vulcans in this book, but with the same cerebral, cool demeanor, they are as close as you can get. Pair one of them with a fiery, human scientist and have them travel around discovery the answers to mysteries and slowly falling in love, and you’ve got a story!

Mystery Title: “A Study in Scarlet Women” by Sherry Thomas

It’s pretty hard to find stand-alone mysteries. But like many mystery series, the individual books in the “Lady Sherlock” series can be read on their own, as well. As the series name implies, this is another re-telling of Sherlock Holmes where the titular character is recast as a woman. But what stands out about this version of the story is how little changed the character is other than her gender. Charlotte Holmes has all of the original character’s brilliance, but also many of his same flaws, like a lack of concern for social decorum and a tendency to put her case before others. But she also has unique aspects as well that take readers who know the original character well by surprise. Supporting characters are also a delightful mix of familiar and new traits and the mystery is complicated and intriguing.

I read this book a few years ago, and it’s really stuck with me ever since. Looking through my reading lists, I find that I typically read about a very narrow period of time and place, Regency and Victorian England. Many historical mysteries or fantasy historical fiction will be set in these times. But this book explored a completely unfamiliar time period and place for me: the South during the Civil War. It tells the story of Adair Colley, a young woman from a family that has tried to protect itself in Missouri by keeping a neutral stance. When this falls through and Adair finds herself in a prison for enemy women, she must call on her own strength to make it back home. The writing in this book is truly unique, and while it took a bit to get used to, the lyrical prose eventually won me completely over. This well-researched historical fiction title is definitely worth checking out.

It isn’t that much of a secret now, but Richard Bachman is the pseudonym for Stephen King when he wanted to write darker(!), less horror oriented works. Eventually he was outed as one and the same, but not before he wrote one of his great masterpieces, “The Long Walk”. Which is still VERY much a horror novel in spite of the pen name. In the near future in a dystopic United States, every year teenage boys can sign up for a walking and endurance test called The Walk. The last person standing at the end is promised fame and fortune, and security in an economically unstable world. You get three times to break the rules. After the third, well… there can only be one standing at the end. This is one of my all time favorite Stephen King stories, as the suspense is relentless, the consequences devastating, and the pacing completely addicting. Think “The Hunger Games” but even darker and with less hope. King/Bachman also continues to capture the spirit of youth, friendship, and adolescent angst, even in the hellscape that is The Walk. You won’t be able to put it down, even if it makes you feel sick by the end. 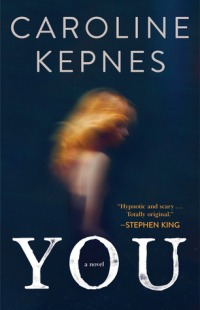 Thriller Title: “You” by Caroline Kepnes

I reviewed “You” way back around the time this blog was first created, and as time has gone on it has become one of my favorite novels thanks to rumination and multiple re-reads. And given that the Netflix show exploded in popularity, I feel the need to promote it again as the perfect read to take to the beach, pool, park, or wherever during the summer months. Joe is a quiet bookseller in New York City, and his life is changed the day that Guinevere Beck walks into his shop. Joe immediately becomes obsessed with her, and starts to plot ways to insert himself into her life. Through any means necessary. Both a creepy stalker tale and an exploration of dark humor in regards to Millennial ennui (as a Millennial I can say this!), “You” is hard to read and yet hard to put down. Joe Goldberg is a narrator you love to hate, but then the same can be said for Beck and just about everyone in this story. If you liked the show on Netflix, you definitely need to read the book!

While this takes place at a summer camp, that isn’t the only reason that I put it on the list of Beach Reads! I remember devouring “Honor Girl” when I first read it. When Maggie Thrash was a teenager she attended an all girls summer camp in the Appalachian mountains. Thrash was living a fairly typical life, enjoying pop music, feeling awkward at times, and growing up in Atlanta. But during the summer that she was fifteen Thrash realized that she had a deep attraction to one of the counselors named Erin, and thus began a summer of exploration of identity, sexuality, and what love is and can be, even if those around you don’t understand. “Honor Girl” is a relatable and at times bittersweet story about first love, fitting in, and the heartbreak that can come with both. Plus, so many references to The Backstreet Boys!! 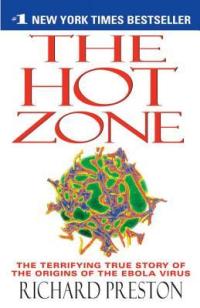 Non-Fiction Title: “The Hot Zone: The Terrifying True Story of the Origins of the Ebola Virus” by Richard Preston

So I don’t put this on the list to scare you guys, even if it IS a pretty scary novel. I put “The Hot Zone” on the list because even though it is a non-fiction book, it reads like a thriller novel that will not let you go until you have read every last page. While Ebola is usually associated with far off countries in Africa, in 1989 a research lab in Virginia has to contend with the possibility that it has shown up in their research monkeys. Suddenly it becomes a race against time and potentially nature as military personnel and scientists alike try to get a hand on what is going on, and if they do, indeed, have a potential outbreak of a ‘hot’ case of Ebola on American soil. Along with the deeply upsetting scenario playing out in the lab, this book also looks at the history and the viruology of Ebola and other hemorrhagic viruses, which gives a context that is not only fascinating but all the more scary. True, it may make you incredibly paranoid about the preparedness our government and scientists have when faced with a deadly outbreak, but it will also keep you interested.

What books are you going to take to the beach, pool, or wherever this summer? Let us know in the comments!