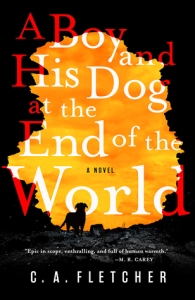 Book: “A Boy and His Dog at the End of the World” by C. A. Fletcher

Where Did I Get this Book: ARC from the publisher!

Book Description: My name’s Griz. My childhood wasn’t like yours. I’ve never had friends, and in my whole life I’ve not met enough people to play a game of football.

My parents told me how crowded the world used to be, but we were never lonely on our remote island. We had each other, and our dogs.

Then the thief came.

There may be no law left except what you make of it. But if you steal my dog, you can at least expect me to come after you.

Because if we aren’t loyal to the things we love, what’s the point?

Review: Let me tell you, a raging debate took place in my mind when deciding whether or not to place a request to read this book. On one side we have the fact that the book description sounds right up my alley, and I’m almost always looking for a good post-apocalyptic story, especially one that seems to be trying to do something new and avoiding the over-saturated realm of dystopian fiction. On the other hand, the book description references a dog being stolen….and I would NOT be ok if something happened to the dog. And let’s be real, this is a tragic world we’re entering, chances are good something would happen to the dog! But in the end, I let my better angels persuade me that fear of pet-related tragedy wasn’t a good enough reason not to read what otherwise sounded like an awesome book. And I’m so glad I did!

Generations have passed since the end of the world as we know it. But while everything is different, much is still the same, like the love of Griz’s small family and the special connection between Griz and his dogs. In a world gone quiet, made up of brief sailing trips to scavenger for more supplies, the dogs provide crucial support not only in their rabbit-catching abilities but in the happy-go-lucky, loving relationship that has always marked the special bond between dogs and humanity. So when Griz wakes to find one dog has been stolen away, he knows what he must do. What follows is a harrowing tale of endurance in the face of impossible odds, small beauties to be found in emptiness and tragedy, and the special place family, be that human or dog, holds in what could otherwise be a bleak existence.

There was so much to love about this book that it’s hard to know where to start. I think one thing that really stood out to me was the world itself. From the very first page, the emptiness and quiet of this new world was apparent. What also stood out was the fact that our narrator, Griz, has come on the scene several generations after the event that struck down the world we know. That being the case, Griz is piecing together the remnants of a foreign world and society, to varying levels of success. The reader is often left guessing as to what exactly Griz is referencing or describing, since he doesn’t always know the purpose behind the things or places he discovers. There was also a character who spoke a different language and the way this was handled was especially clever. The determined and curious reader will have a lot of fun unpacking these bits.

Griz is also a very effective narrator. The story is written in first person told from a Griz who is relating his story from some period in the future. That being the case, there are often references to the fact that some choice or another will have some impact down the line that past-Griz wouldn’t have known about but that present (and narrating) Griz now reflects upon through different eyes. As for the character, Griz was a lovely combination of being innocently naive while also supremely capable in the face of numerous challenges. There is a sense of sadness woven throughout the story, but Griz’s reflections throughout are poignant and often hopeful in the face of some very sad things. I often found myself wanting to highlight various quotes throughout and will definitely be going back to note a few to reference later.

The story is also both what I expected and much more. There is a lot happening throughout, but it also read at a slow, measured pace, giving ample time to focus on, again, the beautiful, quiet reflections of Griz. I really enjoyed how well-balanced the story felt. There is real danger to this world, and we get a few really great action scenes to highlight this fact (but not necessarily the danger you would expect, which, again worked in favor of keeping the story feeling new and original). But there was also time spent highlighting the strangeness of human interactions and relationships in a world where very few humans even exist.

I won’t spoil anything, but there’s definitely an interesting twist towards the end. I ended up guessing it, but I still think it was done very well. In fact, it’s the kind of follow through on a surprise that I wish we had seen in another book I reviewed recently. If you read this one, you’ll know what other book I’m talking about! I also won’t give away what happens with the dog. I will say that there were tears on and off throughout the book, but I still left it feeling incredibly satisfied and immediately passed it off to my friends and family. If you enjoy post-apocalyptic stories, this is definitely one worth checking out!

Rating 10: I loved this book, heart-wrenching and heart-warming at the same time.

“A Boy and His Dog at the End of the World” isn’t featured on any relevant Goodreads lists yet, but it should be on “Best Post-Apocalyptic Fiction.“

Find “A Boy and His Dog at the End of the World” at your library using WorldCat!

One thought on “Serena’s Review: “A Boy and His Dog at the End of the World””