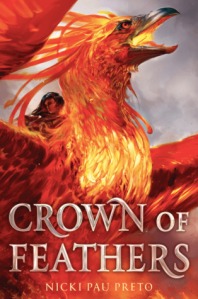 Where Did I Get this Book: Edelweiss +

Book Description: I had a sister, once…

In a world ruled by fierce warrior queens, a grand empire was built upon the backs of Phoenix Riders—legendary heroes who soared through the sky on wings of fire—until a war between two sisters ripped it all apart.

I promised her the throne would not come between us.

Sixteen years later, Veronyka is a war orphan who dreams of becoming a Phoenix Rider from the stories of old. After a shocking betrayal from her controlling sister, Veronyka strikes out alone to find the Riders—even if that means disguising herself as a boy to join their ranks.

But it is a fact of life that one must kill or be killed. Rule or be ruled.

Just as Veronyka finally feels like she belongs, her sister turns up and reveals a tangled web of lies between them that will change everything. And meanwhile, the new empire has learned of the Riders’ return and intends to destroy them once and for all.

Sometimes the title of queen is given. Sometimes it must be taken.

Review: As I mentioned in the Highlights post for this book, I was pretty excited about this one purely based on the phoenixes. While I love me some dragons, there have been approximately a million and a half books written about them, often including dragon riders as well, over the last several years. Obviously this has always been an appealing topic to writers and readers alike, but I have to think a certain HBO show has also had a hand in the sheer explosion of dragon books we’ve seen. But, all of that said, there are a lot more fantastical beasts out there to feature in books, so I was thrilled when I saw this cover and read the description that features riders not of dragons but of phoenixes! Add in some sister drama, and it sounded like it would be right up my alley. Unfortunately, while there were a lot of good elements included, it fell a bit flat for me.

Veronyka and her older sister have been living a vagrant life almost since Veronyka can remember. And all that has kept them going has been their shared dream of finding phoenix eggs and bringing back the famed Phoenix Riders who have faded almost into myth in the midst of civil war. But when things go wrong, Veronyka finds herself alone with this dream, hiding her identity from those around her. And, of course, there is much more going on than what there seems. What is the truth behind Veronyka and her sister’s strange family history? And what role will they each play in building a new future?

Most of what I liked about this book had to do with the world-building, and, of course, the entire concept of an organization of phoenix riders. Yes, there is a lot of cross-over between this and what we’ve seen from similar dragon rider books, but the unique attributes of phoenixes (notably their regenerative proprieties) adds a new layer of intrigued to how these great birds would operate with their partners. I also liked the complicated relationship laid out between Veronyka and her sister. From the very beginning, we see the tension that lies between them. There is love, but its always tinged with just a bit more. Sometimes jealousy, sometimes anger, sometimes suspicion. As the book plays out, this relationship becomes even more important to the story, and while I was able to guess at the reveal in the end, it was still a pretty interesting concept and a great set-up for the next book.

But beyond those things, I simply had a hard time getting into this book. I was never able to slip fully into the experience and instead the process of reading it began to feel like a chore. I think there were probably a few reasons for this.

One, there is a lot of info-dumping in the first quarter to a third of the book. The story alternates between Veronyka and another character, and between the two of them, they almost end up repeating the exact same historical and cultural lessons back to back. Information provided by one character will be almost directly repeated by the other, but with a few changes in perspectives (but by no means enough to justify the repeated dump). Not only was the repetition annoying, but info-dumping on its own is always a quick way to kick me out of a reading experience. Most of this information could have been sprinkled throughout and come up in more natural ways.

Second, the story drags. There are blips of exciting action only to be followed with long chunks of very slow plot movement. The story probably could have been significantly shorter and be better for it.

Third, the characters on their own weren’t all that interesting. While I did like the complicated sisterly relationship, that aspect of the characters’ relationships would often fall to the side. And when left with Veronyka herself and the other male character, Sev, I was often simply bored. Which is really saying something, given how much I typically enjoy girls-disguised-as-boys stories.  They both simply felt pretty flat. I was also not terribly interested in the romance included in the story.

So, while the book had a lot of good things going for it (world-building, unique fantasy elements, a diverse cast of characters), I have to ding it down a few ratings simply because I didn’t enjoy reading it. And really, at its heart, that’s my main requirement for a book! Readers who have more patience than me and who are looking for a YA fantasy novel that is still pretty awesome with its handling of phoenixes, this may be the book for you! Just wasn’t for me, sadly.

Rating 6: Info-dumping and a floundering plot bogged down this book despite the cool factor that comes with having a story about girls riding around on phoenixes!

“Crown of Feathers” is included on these Goodreads lists: “Fantasy / Sci-fi Books With POC Leads” and “Fiction: Phoenix (Mythological Bird).”

Find “Crown of Feathers” at your library using WorldCat!