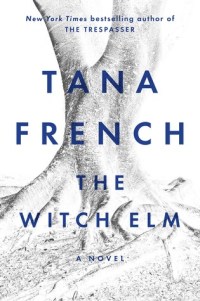 Where Did I Get This Book: I received an ARC from NetGalley.

Book Description: Toby is a happy-go-lucky charmer who’s dodged a scrape at work and is celebrating with friends when the night takes a turn that will change his life – he surprises two burglars who beat him and leave him for dead. Struggling to recover from his injuries, beginning to understand that he might never be the same man again, he takes refuge at his family’s ancestral home to care for his dying uncle Hugo. Then a skull is found in the trunk of an elm tree in the garden – and as detectives close in, Toby is forced to face the possibility that his past may not be what he has always believed.

A spellbinding standalone from one of the best suspense writers working today, The Witch Elm asks what we become, and what we’re capable of, when we no longer know who we are.

Review: Thank you so much to NetGalley for providing me with an eARC of this novel!

I first read Tana French with her first “Dublin Murder Squad” novel “In The Woods” around the time it came out. I liked it enough, but didn’t really move on until I read “Faithful Place” a few years later. I like French’s style, and I like her characters, but the mysteries themselves never really intrigued me as much as I wanted them to. But when I read about her newest novel, “The Witch Elm”, I was immediately interested in the premise. A man returns to a childhood family home and while he’s there a skull is found in a wych elm. Given that it sounds a little like the ‘who put Bella in the wych elm?’ crime, I wanted to see what French would do with it given her prowess for eeriness and dark characterizations.

“The Witch Elm” is a mystery about how this skeleton got into this tree, as well as how our main character Toby is connected to it. But ultimately it is more a story about family, memory, and how our perceptions of reality can change. Toby is an unreliable narrator not in that he is deliberately hiding facts from the reader, but in that he has gaps in his memory because of time and because of a traumatic brain injury sustained at the start of the book. French did a very good job of integrating the burglary and attack into the plot without making it feel purely plot driven, as there was a slow build up to it and then a sustained period of immediate consequences after that lingered well before the main drive of the plot at Toby’s Uncle Hugo’s home. And since Toby is constantly questioning his own memory, and his potential culpability in regards to the body in the tree, the reader also has to wonder whether or not we are following an innocent bystander caught up in a murder, or the murderer himself. But French is also very adept at presenting other characters who could also have a hand in murder, for many realistic and believable reasons. I quite enjoyed the mystery and seeing where it was going to go next.

I also very much enjoyed the family dynamic that Toby had with those around him, from his Uncle Hugo to his cousins Susanna and Leon. While the relationship with Susanna and Leon was a bit strained, be it because of their potential to be suspects to their differing views on how they should be dealing with their uncle to baggage from the past, it felt very real for a family with various dysfunctions. And Toby’s relationship with Hugo is quite lovely, as Hugo is dying of a brain tumor and Toby, having his own medical set backs and problems with cognition, really connects with him. They all did feel like a real family with it’s ups and downs, and this aspect of the book was probably the strongest for me.

I think that the main quibbles I had were with the length of the story. It takes a little bit of time to get started, for one thing, and while I understand why it does (as mentioned above, French is careful to make the attack and break in feel like more than just a device to get Toby’s mind foggy), I felt like it dragged its feet a bit. I found myself tempted to skip ahead to the family estate, and while I didn’t do that I do think that it took just a little too long to get all of the set up into place. And then it went on a bit longer than it had to, with a tacked on moment at the end that didn’t feel lit it needed to be there. I don’t wish to spoil it so I won’t say what it is here, but a new moment of conflict with very dire consequences happens well after we’ve found out the solution to the Wych Elm mystery at hand. And I didn’t quite understand why it had to happen at all. It felt unnecessary and it didn’t add much to the plot.

But all that said, Tana French is still an author who knows how to write an atmospheric mystery with some fascinating characters. “The Witch Elm” was a fun detour from her “Dublin Murder Squad” series, and I will be very curious to see if she is going to write more stand alone novels down the line, because this one stood on it’s own two feet pretty handily.

Rating 7: While there was a compelling mystery and family story at it’s heart, “The Witch Elm” took a bit too long to get going, and lagged longer than it had to.

“The Witch Elm” is included on the Goodreads lists “Autumn Seasonal Reads”, and I think it would fit in on “Popular Family Secrets Books”.

Find “The Witch Elm” at your library using WorldCat!