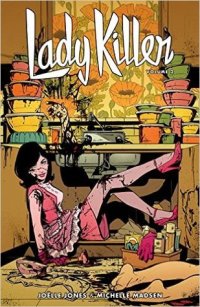 Book Description: The killer housewife is back! The Schuller family has moved to Cocoa Beach, Florida, where life carries on as usual. Josie continues to juggle Tupperware parties, her kids, and a few human heads. However, when someone from her past tails her on a hit, she may be in for more than she bargained for.

“Lady Killer is worth its weight in gold for the art alone, but the enigmatic Josie Schuller is the real appeal.”—Newsarama
“A level of violence that can only be described as Mad Men’s Betty Draper meets Dexter.”—Comic Book Resources

Review: Given that I enjoyed the first volume of “Lady Killer” by Joëlle Jones, it was a long and difficult wait for “Volume 2” to finally come out. Assassin Housewife Josie Schuller was a character that went above and beyond my expectations in the initial tale, an archetype that could have easily fallen into sex kitten kitsch lie so many other ‘badass’ women before her (Harley Quinn, anyone?). But the strength of her character lies within her complexity, and her multifaceted life and personality makes her an intriguing and fascinating protagonist, and I was excited to see where the choices she made in the previous book took her.

When we left Josie she had broken ties from the group that hired her on as an assassin. In a rather, uh, flamboyant way. Now she and her family (consisting of her husband Gene, her twin daughters Jane and Jessica, and her suspicious mother in law Mrs. Schuller) has moved to Florida, and Josie is working as a free agent assassin as well as maintaining the role of a perfect homemaker. By day she throws cocktail parties and barbecues, by night she’s killing targets. The duality of an ideal 1960s housewife and a cold blooded killer is both hysterical, but a bit barbed as well. Even hit women need to juggle it all, and have certain facades to maintain just as many women today feel a need to do so. I love seeing Josie interact with both her targets and her family. Her love and devotion to Gene is lovely to see (especially since he’s so clueless about who she is and what she is capable of), and little interactions with her daughters shows the fierce love she has for them and keeping them safe, be it from physical dangers or loutish, inappropriate men and their ‘humor’.

One of the realities of Josie’s new life, however, is that by working solo she doesn’t have the support she had in the past, which makes flying under the radar more difficult. It was one thing to take out a target and have others there to clean up for you; it’s quite another to have to deal with it yourself, especially if you are a petite lady. I like that Jones was realistic in that Josie, capable assassin or not, struggled with body disposal and clean up, and had to turn to a shady character from the past, Irving, to help her with it all, as well as finding herself approached by another group that may want to strike a partnership. I like that Josie is frustrated that she needs help, and wants to continue her career on her own terms. But of course, with everyone having ulterior motives and underestimating the excellence that is Josie Schuller, nothing can come easy, and she finds herself the victim of the toxic assumptions that even though she’s a trained killer, ultimately she’s a woman, and therefore exploitable. The themes are evergreen, aren’t they?

Speaking of underestimating women, Josie isn’t immune to it. We get some background to her crabby and suspicious mother in law, Mrs. Schuller, who up until now Josie has seen as a mere thorn in her side. Turns out, Mrs. Schuller has a lot of stuff she’s been hiding, and some of her knowledge and backstory sparks off some dangers for Josie, and in turn their shared family. I am going to go into this a bit because I have a lot to say and dissect with this revelation, so consider this your warning for

As it turns out, Mrs. Schuller used to work as a clerk for the Nazis. She’s now living a secret life in the U.S., hiding her past from those around her. I personally was uncomfortable with this revelation. While I like that it helped propel another plot line further along, it feels gross to me that this woman is pretty much getting off scott free as of now for being an honest to God Nazi. I appreciate the device of her being able to recognize ‘badness’ when she sees it, and that it means that she has some, um, skills that may come in handy down the line, but ultimately I really dislike that she is a foil to Josie. It’s a monster recognizing a ‘monster’ kind of situation, and I find it hypocritical that she wants Josie away from her son and grandchildren when she actively helped commit genocide. It’s a huge blip in what had, up until that point, been a stellar story, and sets it off kilter for me. But if we are willing to set aside the whole Nazi thing, it does show some interesting parallels between Josie and her mother in law, and how they both love their family fiercely in the face of hiding  very large and very dangerous secrets. Secrets that can’t keep sustaining themselves.The idea that Gene will forever be in the dark about Josie’s profession is a tedious one, and I was worried that we would continue to see Josie making roasts, stirring martinis, and keeping him in the dark to a laughable degree. But Jones makes a pretty ballsy decision in this volume that lays the groundwork for Josie’s perfect facade to start cracking as things become more and more out of control. We are left on a pretty big cliffhanger and potential gamechanger about this, as well as the return of someone who could REALLY mess things up for Josie’s personal life.

So Nazi storyline aside, I really enjoyed “Lady Killer: Volume 2”, and the growth and shift that Josie Schuller maneuvers within in. I had to wait so long for this volume, and I have the feeling the the next one will also be a wait. It’s one that I am more than willing to wait for, though. However impatient I may be.

Rating 8: A fun follow up with my favorite assassin housewife, Josie Schuller continues to buck gender norms and subvert expectations of 1960s womanhood! “Lady Killer: Vol. 2” keeps the fun going and I can’t wait for the story to continue.

“Lady Killer: Vol.2” is included on the Goodreads lists “Great Graphic Novels (released in 2017)”, and should be included on “Women Creators in Comics”.