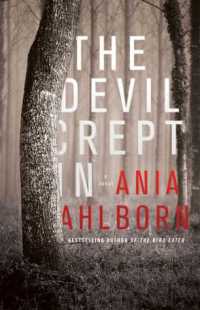 Book: “The Devil Crept In” by Ania Ahlborn

Book Description: Young Jude Brighton has been missing for three days, and while the search for him is in full swing in the small town of Deer Valley, Oregon, the locals are starting to lose hope. They’re well aware that the first forty-eight hours are critical and after that, the odds usually point to a worst-case scenario. And despite Stevie Clark’s youth, he knows that, too; he’s seen the cop shows. He knows what each ticking moment may mean for Jude, his cousin and best friend.

That, and there was that boy, Max Larsen…the one from years ago, found dead after also disappearing under mysterious circumstances. And then there were the animals: pets gone missing out of yards. For years, the residents of Deer Valley have murmured about these unsolved crimes…and that a killer may still be lurking around their quiet town. Now, fear is reborn—and for Stevie, who is determined to find out what really happened to Jude, the awful truth may be too horrifying to imagine.

Review: Summer is here and my summer childhood memories have a lot of ‘wandering through the woods’ in them. My childhood home was near a wooded area along the Mississippi River, and my sister and I would wander down to a secret waterfall and to the banks of the river. So there is something a bit familiar about a story that involves children spending their time exploring in the woods. I’m thankful that nothing bad ever happened to us while on our adventures, but that doesn’t mean that I don’t enjoy reading about bad things happening to other people in the woods! So I was very interested when I heard about “The Devil Crept In” by Ania Ahlborn. Kids disappearing in a forest that holds many secrets? Oh hell yeah, I’ll read that, I’ll read the HELL out of that!

But I think that the ultimate problem I had with this book was that it kind of had two stories going on, and though they sort of connected, there were too many questions left behind for both of them. To really review this, I’m going to go into spoilers for this book, so that’s a warning to you all who may want to read it. And for posterity…

Our first story is the one that is put in the description of the book. You have Stevie, an awkward and lonely ten year old in a fraught home life. His older brother Duncan is a bully, his Mom doesn’t really understand him, and his stepfather Terry is abusive and cruel. His only friend is his cousin Jude, who has problems and behavioral issues of his own, as he’s carried quite a bit of rage in him since his father died. When Jude disappears, Stevie is obsessed with finding him, even if he’s heard stories and rumors about the woods and those who have disappeared before. Specifically a young boy named Max, who disappeared and whose body was found weeks later. While those around him want to believe that Jude just ran away, Stevie thinks that the weird shadow he’s seen in the woods, especially around an old abandoned house, is the real answer to Jude’s disappearance.

The second story involves that house. A woman named Rosie lives there. Years before she was married to a doctor, and she desperately wanted children, but couldn’t carry a pregnancy to term. After a traumatic miscarriage, she drove down to Big Sur in a tizzy, and met a strange biker hippie named Ras. He asked her what she would do to have a baby. And she said “Anything.”

After she goes home, shortly thereafter her husband dies in a car accident. Shortly thereafter, she discovers she’s pregnant. For whatever reason that I didn’t think was properly fleshed out or explored beyond “I already am anxious around people and how mortifying to be a pregnant widow!”, she stays isolated in her cabin the woods and basically gives birth to a monster, who likes to eat flesh and blood. She names him Otto, and is perfectly fine with the fact he grows up eating cats, dogs, stray animals, and then….. Max Larsen.

So you see where this is all going. Jude disappears because he falls into the thrall of Rosie and Otto. But he isn’t killed by Otto, and when he gets home, he keeps hearing the siren’s call to go back and be with them. So there is a connection between story one and story two. And I loved that I could see the woods and the atmosphere, as well as the creepy shadows out in the trees or on the porch or through the window. That is the kind of creep that I live for. But boy oh boy, do I have so many questions that are never explained or answered. Sometimes this is okay. But in this case, t’s done in a way that comes off as less ambiguous and more forgotten about. My biggest issue is that Ras storyline. Ras plays such an important role in this book for obvious reasons, but he we don’t get any answers about him. What is he? What are his motivations? Is he the Devil? Is he a servant of the Devil? How does he keep track and tabs on Otto and Rosie (because it is implied near the end that he does), is it because he’s magic? I don’t necessarily need all the answers about this guy, but I would like a little more to him as opposed to just being a super convenient plot device! There is also some ambiguity at the end, which I WILL keep under wraps because it’s relevant to the endgame, that didn’t quite sit well with me. I had a hard time figuring out if it was the case of an unreliable narrator, or a magical system that was at play, or people unable to believe or accept the things they see. And also, WHY is it that Jude seems to be able to be possessed by Otto all of a sudden? So now Otto can astral project? It was a lot of mythos that didn’t have much rhyme or reason, and only worked because it needed to work for the story to progress.

Also, I had a hard time with the characters and their personalities. I understand that our protagonist and his family are flawed and have all had hard lives, but for a horror story to be very effective you need to care about the characters to some extent. If you don’t, you won’t be afraid for them. I was afraid for Stevie, because he was pretty sympathetic, but everyone else was pretty cardboard cut out antagonistic (always fun to see the evil stepdad knocking kids around, or the mean older brother hurling anti-Semitic comments here and there) or simpering (Stevie’s Mom and Aunt Mandy are understandably passive, but it was hard to deal with when their passivity leads to their kids being hurt). I basically was just waiting for them all to have horrible things happen to them so I could move onto the next moment, and then onto the next story. Which isn’t how I want to feel when getting to the end of a horror novel.

“The Devil Crept In” had promise, but it didn’t live up to my expectations. I’m not looking at the woods I can see through my kitchen window and feeling afraid, so you know it didn’t bring the scares. I’ll stick to “Disappearance at Devil’s Rock” if I want lost child and scary nature fiction.

Rating 5: Definitely had some creepy moments and imagery, but there were too many threads that were left untied. Plus I couldn’t find much to like about the characters.

“The Devil Crept In” is new, and isn’t on many Goodreads lists. But I think that it would fit in on “Books To Avoid While Pregnant”, and “The Devil Made Me Do It”.

Find “The Devil Crept In” at your library using WorldCat!

3 thoughts on “Kate’s Review: “The Devil Crept In””