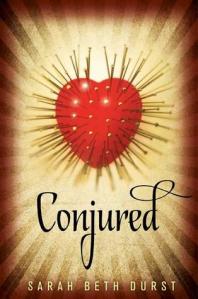 Book Description: Eve has a new home, a new face, and a new name—but no memories of her past. She’s been told that she’s in a witness protection program. That she escaped a dangerous magic-wielding serial killer who still hunts her. The only thing she knows for sure is that there is something horrifying in her memories the people hiding her want to access—and there is nothing they won’t say—or do—to her to get her to remember.

At night she dreams of a tattered carnival tent and buttons being sewn into her skin. But during the day, she shelves books at the local library, trying to not let anyone know that she can do things—things like change the color of her eyes or walk through walls. When she does use her strange powers, she blacks out and is drawn into terrifying visions, returning to find that days or weeks have passed—and she’s lost all short-term memories. Eve must find out who and what she really is before the killer finds her—but the truth may be more dangerous than anyone could have ever imagined.

Review: I’ve read several of Sarah Beth Durst’s books in the past, and they are if anything, always unique. So when I discovered this one, with its creepy carnival imagery, amnesia, and serial killer nemesis, I knew that the story would be in the hands of an author capable of fully taking advantage of these elements.

The story started off slowly for me, to be honest. While Eve’s amnesia is an important part of the story, it also leaves the reader in an awkward place being equally (perhaps even more so!) in the dark as she is. We’re pretty much plopped down into a situation with no background information and a narrator who doesn’t know anymore than we do, but who is clearly involved in something nefarious, with hints being thrown every direction by other characters. Durst also wasn’t in a rush to resolve this. I was about a third of the way into the book before I started feeling truly invested in the story. And while this is a rather large hurdle to leap for many readers, I would say the later pay off is definitely worth it.

Eve herself is such a unique narrator. Her voice is so strange and it speaks to the deftness of Durst’s abilities that she can show Eve’s growth through even the most minute of changes in Eve’s outlook on what goes on around her. When the reveal comes towards the end of the story, I actually found myself paging back through the book trying to spot these change points, many of which I missed in my initial read through.

As for the twist itself, parts of it I was able to guess, but others came completely out of the blue. The motivation of the villain, Eve’s true back story in relation to the villain, was both heart breaking and distinctly chilling. I particularly appreciated the fact that the story is not quickly wrapped up once some of these twists become clear and we get to fully explore the reality of these developments and spend time in this new world order.

Further, the confusion and distrust that leads to these reveals were excellent. Eve has been told everything, she remembers/knows none of it for herself. So as she begins to question those around her, so do we, the reader. Her bouts of amnesia were both frustrating and refreshingly new to this type of story. She isn’t just a narrator who doesn’t remember her past but whose stories unfolds neatly from there on out. Eve keeps forgetting. Between chapters even! Like I said, frustrating, but also very interesting.

As for supporting characters, these were a bit more hit and miss. I loved Malcom from the get go, and grew to love his partner as well. However, I was less thrilled with the three other teens Eve meets: Aiden, Victoria, and Topher. They seemed like a neat idea, but ultimately, I feel like they didn’t even need to be in the story. Very little of the outcome would have been changed, and they were often so unlikable that I found myself wanting to skim read through their portions.

And as for the love interest, Zack…I just don’t know. There are elements of his character that I liked, but he never fully recovered for me from his introductory line of dialogue when first meeting Eve:“I think it’s a shame that it’s customary to shake hands upon greeting when what I really want to do is kiss your lips and see if you taste like strawberries.”

Personally, if a guy introduced himself to me that way the door would be slammed on the chance of us even be acquaintances, let alone romantically involved, right then and there. It’s supposed to be twisted together with Zack’s defining characteristic: he does not tell lies. And while this plays an important role later in the story, I think there is an obvious miss between “not telling lies” and “not spewing out every ridiculous-bordering-on-creepy thought that comes into your head to a complete stranger.”

Slow start and creepy Zack aside, once pieces of the mystery started fitting together, I couldn’t put this book down. If you like dark, fantasy stories and can be patient with unreliable narrators and a slow start, definitely check this one out!

“Conjured” is included on these Goodreads lists: “Fairy Tales for Grown Children” and “YA & Middle Grade Circus/Carnivals/Amusement Parks.”