Why I’m Interested: This collection of retold fairytales sounds intriguing. I’m always looking for new fairytale re-tellings, and these sounds like classics with twists: an assassin on a dealing, a “Charming Ball,” a fairy godfather (!) and sleeping beasts. Fairytale re-tellings have had a bit of a “moment” the last several years with decreasing returns it seems. Hopefully this book will prove that there is still new life to be breathed into these types of stories!

Book: “A Want of Kindness” by Joanne Limburg

Why I’m Interested: It’s been a while since I’ve highlighted a historical book, and when I came across this one, it sounded right up my alley, telling the story of Queen Anne who ascended to the throne in 1702 and was the last of the Stuart line. I’ve read a good amount of Phillipa Gregory in my day (a staple in historical regency fiction, though she mainly focuses on the Tudors), and this sounds very similar. Mixing fact and fiction, Limburg re-creates the intrigue and tragedy that made up Anne’s life. While the potential for crying is high with this one, I’m excited to check it out!

Why I’m Interested: Another short story collection, this one by the well-known sci-fi author John Scalzi. The collection spans the last 20 years of Scalzi’s work and features four new stories. I haven’t read a lot of Scalzi’s work, but he has won a Hugo award for his novel “Redshirts” and is known for mixing sci fi stories with humor featuring the absurd. Just look at a few of these stories’ titles to get an idea: “Morning Announcements at the Lucas Interspecies School for Troubled Youth,” “Your Smart Appliances Talk About You Behind Your Back,” and “The AI Are Absolutely Positively Without a Doubt Not Here to End Humanity, Honest.” 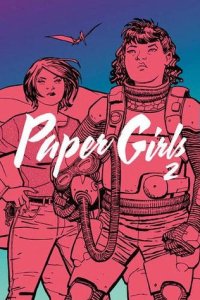 So I liked the first volume of “Paper Girls” a fair amount, and while I’m hesitant about the hard line Sci-Fi bent that it seems to be taking (just look at the cover…), I like the characters. I like them a lot. My hope is that even if it does go pretty deep into Sci-Fi that the girls keep me interested enough that I’ll want to keep going. I’m also hoping that a couple of the girls who didn’t get as much play last time around will get some more fleshed out characterizations. Given the huge hit that was “Stranger Things”, I hope that the love for 80s Nostalgia keeps going in this series, as obviously it has an audience. “Paper Girls” has that potential.

This is kind of a new thing, but it’s kind of the first time in awhile that I’ve started following a comic series as the issues come out. It probably doesn’t surprise anyone that the series I am doing this for is “The Lost Boys”!!!! This series picks up where the movie left off (and I’m guessing erases the two sequels from the canon), and it follows Michael, Sam, and the Frog Brothers as they deal with a new group of vampires. This time it’s a group of ladies called The Blood Belles, and BOY are they badass!!! I’m really enjoying this series, and I hope that it can keep the laughs and scares going.

Given that I’ve started a re-read of Warren Ellis’s classic “Transmetropolitan”, when I found out he’d written a techno thriller I was on board. Though I do kind of get nervous about the idea of techno-thrillers (man am I not a science or math person), I love Ellis and his stories, so I am more than willing to give this a chance. Plus, it sounds very strange, with strategists trying to prepare for ‘upcoming doom’ either by adapting technologies to stave it off, or by plotting about how to survive civil upheaval and chaos. One of the more positive strategists may have stumbled upon a vast conspiracy about the future and the doom that it predicts….. I’m a bit confused, but super intrigued too!

What upcoming books are you looking forward to this month? Let us know in the comments!