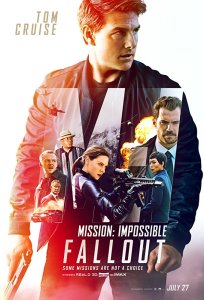 I actually watched this in August but somehow forgot to include it in that list, so it’s going on here! The “Mission – Impossible” series is one of those strange beasts that somehow has gotten better with age. Not only do we all want to check in to see what crazy stunt Tom Cruise will be pulling off this time, but the cinematography with how said stunt is shot has gotten better and better. Chock full of action, this lasted movie leans in on all that was great with the ones before it. The cast is phenomenal (though I will always hold the weird blurred section on Superman’s face in “Justice League” against this movie as it was the mustache Cavill had to grow here that they were trying to cover up). The action was non-stop. And it was even fun to see a few familiar faces from movies past. If you’re a fan of the franchise, this is a worthy next entry.

So apparently it was an action movie/show type of month for me, as my second pick features yet another franchise heavy weight. This time it’s John Krasinski who takes on the titular role, and does an excellent job of it (to no one’s surprise). I’ve seen several of the past movies, but haven’t read any of the books, and the character was always only mildly interesting to me. But Krasinki’s effortless charm brings a new level of soulfulness to the standard action hero, and the show wisely learns lessons from other successful mini series, especially that shows like this often live and die on the strength of the villain. And here they devote a good amount of time to developing the villain and even, at times, making him a sympathetic character. The show was also incredibly tense at times, and I’m sure more than one kitten was squeezed more than he would have liked as I watched.

Telling the story of a father who lives with his family in a gated community when he teenage daughter goes missing, “Safe” is both comfortingly familiar as well as interestingly new. “Broadchurch-like” could almost be a genre of its own at this point,  and this would fall well within that as the story plays the same mind games by introducing a wide cast of suspects all hiding their own secrets. However, it is an interesting twist plotting the story around a missing girl rather than than a known murder. The question of whether she’s alive or not is its own mystery for much of the story. While I, like many, was horribly burned by the ending of “Dexter,” I always liked Michael C. Hall, so it’s a blast to see him in action again. Yes, the accent is weird at first (the story is set in England), but after a while, even that faded as I focused in on the secrets that were slowly be revealed.

Yep. I saw “Hamilton”. It is currently running in the Twin Cities, and my mother was one of the lucky people to win the lottery to get a time slot to potentially be able to buy tickets. And yes, it was that complicated. But she scored four, and my husband and I went with my parents (it was a birthday gift to him from my folks). I had high hopes that it was going to be good, because after all, I enjoy the soundtrack. But even with that knowledge I couldn’t anticipate just how excellent it was going to be. The music is, of course, phenomenal, but actually seeing the players on stage was a whole other experience, and everyone was great. Not only is it entertaining and in a lot of ways informative, it’s also an incredibly emotional show. By the end of the show I had been moved to tears multiple times, and all of us really loved the performance.

It’s finally here!!! Near the inception of this blog I read “You” by Caroline Kepnes, and really enjoyed it. Since that first read, I’ve re-read it multiple times, as I am downright obsessed with Joe Goldberg, the psychopathic stalker extraordinaire. You can imagine how excited I was when I found out that Lifetime was turning the Joe Goldberg books into a TV series, and now that it’s started airing it’s been so great to see on screen. Penn Badgeley is a VERY good Joe, and while the show has tweaked and made some changes to the book (some of which I’m not COMPLETELY on board with yet) it has really captured the essence of the narrative at its very heart. It’s been so fun seeing the various moments from the book play out, from mentions of a red ladle to ‘engine engine number 9’ (if you’ve read it you know what these mean), and two episodes in I’m completely hooked. 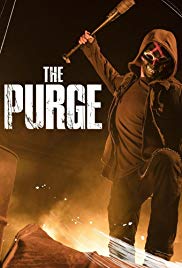 I first saw the original “Purge” movie a few years ago, and found beneath the horror movie surface a story that had a lot to say about American society, specifically how the ‘haves’ victimize the ‘have nots’. For the unaware, the basic premise is that an extremist political party known as the New Founding Fathers of America is now the dominant party, and once a year they hold a Purge, in which all crime is legal for twelve hours.  The TV series takes place on the 10th Purge, and follows a number of people during the twelve hours, from a man looking for his sister, to a liberal minded couple who is wooing NFFA big wigs in hopes of getting funding for a charity project, to a woman who has a grudge against her colleagues, to a mysterious masked ‘purger’. It continues to ask a lot of good questions about who would support The Purge, and who would be victimized by it.