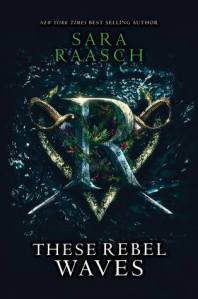 Where Did I Get this Book: Edelweiss!

Book Description: Adeluna is a soldier. Five years ago, she helped the magic-rich island of Grace Loray overthrow its oppressor, Argrid, a country ruled by religion. But adjusting to postwar life has not been easy. When an Argridian delegate vanishes during peace talks with Grace Loray’s new Council, Argrid demands brutal justice—but Lu suspects something more dangerous is at work.

Devereux is a pirate. As one of the outlaws called stream raiders who run rampant on Grace Loray, he pirates the island’s magic plants and sells them on the black market. But after Argrid accuses raiders of the diplomat’s abduction, Vex becomes a target. An expert navigator, he agrees to help Lu find the Argridian—but the truth they uncover could be deadlier than any war.

Benat is a heretic. The crown prince of Argrid, he harbors a secret obsession with Grace Loray’s forbidden magic. When Ben’s father, the king, gives him the shocking task of reversing Argrid’s fear of magic, Ben has to decide if one prince can change a devout country—or if he’s building his own pyre.

As conspiracies arise, Lu, Vex, and Ben will have to decide who they really are . . . and what they are willing to become for peace.

Review: After devouring “Song of the Current” and “Whisper on the Tide,” I felt a deep hankering for more fantasy/pirate good times. And, luckily for me, the topic seems to be a popular one right now in the YA fantasy world, as not only this book, but another “Seafire” (to be reviewed soon) were up and available on Edelweiss. I didn’t hesitate to request it. However, while the story was enjoyable enough, I think the unabashed joy and adventure that came from the “Song of the Current” series kind of left me feeling a bit cold about this more serious, political story.

The story is told from three perspectives: Adeluna, a young woman who grew up as the solider daughter of two revolutionary parents, fighting for the freedom of her island nation. She now finds herself transitioning into a role of politics, but is finding her fighting instincts harder to dismiss than she had thought. Deverux is the pirate of this story and is seemingly only for himself and his crew, collecting and selling the island’s magical plants. But all too soon, he finds himself caught up in intrigues that are way above his pay level. Benat is on the other side of things, quite literally growing up in another country and the one that fought on the other side of Adeluna’s revolution. The son of the king, Benat struggles to reconcile his own interest in magic with the teachings of his faith that draw any connection to magic as heresy.

Even in that brief description, you can see that this book is biting off a pretty big plot to chew upon. Not only do each of these three characters have very different histories, but they each represent a complicated group of individuals who are all operating against each other (openly and not so openly) in a nation-level tug of war over the future of the island and its valuable plant magic. I did like the complicated weave that the author put together here. None can say that she dumbed this story down for younger readers. However, I don’t necessarily think that she fully committed to the complexities of her world either, or, at the very least, explained them fully enough. I never really understood the religion that drove Benat’s nation, and as a major player in the series, this was a constant annoyance.

Further, the story was much more political than I had expected. This is one of those hard criticisms to diagnose. Is it really a fault with the story that readers went in expecting something else? Or is this simply a failure of marketing? Either way, I started this book hoping for more rollicking adventures on the high sea. What I got instead was a lot more political shenanigans. And I’m not against political stories as a whole, but I also don’t feel that this book pulled that aspect of the story off very well.

For example, we are told that Adeluna’s parents were both brilliant revolutionaries, able to successfully lead a group of guerilla soldiers against a much stronger nation and ultimately win freedom for their island. They came up with and planned intricate strikes. But in the very first few chapters, we see a political council meeting where both of Adeluna’s parents are apparently perplexed by the political maneuverings of a few of the other council members. But Adeluna, of course, sees right through this. And yes, I know this is a YA novel and that Adeluna needs to be the one to drive her portions of the story. But weird moments like this just make me roll my eyes. There are ways to make your teenage protagonist drive your story and come up with unique insights without directly undercutting the adults that you just spent some much time building up. I would recommend “The Tethered Mage” and “The Defiant Heir” as excellent examples of how to have powerful parental figures while not damaging the competence and leading force of your younger main character. This is only one example, but it was present throughout the book and I started having a hard time taking it seriously.

As for the main three characters, I did like them for the most part. The romance was completely predictable, however, and again, I didn’t feel like this book was really introducing anything new with either of these characters. I did appreciate the fact that it presented a gay main character and gave him a decent story. There have been some complaints that his wasn’t the main romance of the story, but I feel like, again, this was a disconnect between the way this book was marketed and what it turned out to be ultimately. I think a lot of readers were expecting “gay pirates” and that’s not this. I didn’t know much about this aspect of the story, so I didn’t have those expectations going in. So, from my perspective, it was still a good example of including diversity in your main cast. But, in the end, I still didn’t feel overly invested in any one of the three of these characters. They all felt familiar, but in a “been there, read that” type of way.

Ultimately, I didn’t love “These Rebel Waves.” There’s nothing objectively “bad” about the book, but it also wasn’t introducing anything truly new. Even the magic system, which on face value should have been points in the “new” column, turned out fairly bland. We never got any real look into how this work or any details: plants were just magic. Ok. I also feel like this book struggles against reader expectations. The story was much slower-moving and politically focused than I had expected. But even had I know this going in, I don’t think this is the strongest example of that type of story either. In the end, there have just been better books telling very similar stories.

Rating 6: Nothing terrible or anything, but pretty forgettable in my opinion.

“These Rebel Waves” is newer, so it isn’t on many relevant Goodreads lists, but it is on “2018 Queer SFF Releases.”

Find “These Rebel Waves” at your library using WorldCat.