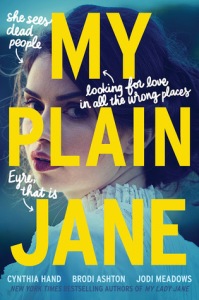 Where Did I Get this Book: Edelweiss

Book Description: You may think you know the story. After a miserable childhood, penniless orphan Jane Eyre embarks on a new life as a governess at Thornfield Hall. There, she meets one dark, brooding Mr. Rochester. Despite their significant age gap (!) and his uneven temper (!!), they fall in love—and, Reader, she marries him. (!!!)

Prepare for an adventure of Gothic proportions, in which all is not as it seems, a certain gentleman is hiding more than skeletons in his closets, and one orphan Jane Eyre, aspiring author Charlotte Brontë, and supernatural investigator Alexander Blackwood are about to be drawn together on the most epic ghost hunt this side of Wuthering Heights.

Review: I picked up the first book in this series (?) pretty much on a self dare: how could the tragic story of Lady Jane Grey  somehow be turned into a fantasy/comedy YA story and NOT be terrible? Well, I was definitely proven wrong, so when I saw this book coming out, I did nothing more than glance at it, see that it was somehow a Jane Eyre retelling, and instantly request it. Seriously, I didn’t even read the actual book description, because I was surprised as heck that there were two other narrators when I actually started reading, even though it states it right there in the blurb. Anyways, long story short, I loved this book.

Jane Eyre is working as a teacher at the orphanage/school where she was raised, alongside her friend Charlotte Bronte. Their quiet, but not so happy, lives are interrupted with the arrival of ghost hunter extraordinaire, Alexander Blackwell, who sees in Jane a powerful addition to the supernatural services organization for which he works. Jane doesn’t see it the same way and flees to be a certain governess at a certain dark and creepy house with a certain brooding gentleman in residence. Charlotte, on the other hand, is all too willing to prove that she, too, has what it takes to hunt ghosts and gets herself involved, like all good heroines do.

It’s really hard to blurb this book as so much of the plot is caught up in the twists that the authors are constantly lobbing into what is a very well known classic tale of tragic love. And man, I don’t want to ruin the surprises that are in store! In many ways, I enjoyed this book even more than the first book. Other than her terrible end, I didn’t really know anything about the history behind the original Lady Jane Grey and, from what I do know, the story veered from that path pretty early on to allow for our leading lady to have a proactive role, rather than sitting alone and doomed on a throne for a few days.

But here, I am very familiar with the original plot line of “Jane Eyre” so watching the story unfold in a completely unexpected way, artfully tying in characters and events that mirror those from the original but who show up and do things that I would never have guessed was an utter delight. For all that we gain two additional characters, one of whom is the author of the original book in question, it was truly impressive how closely these authors managed to tie it all together with that story. They also neatly explored some of the criticisms that can be thrown at the door of the original, as well.

As characters go, I actually ended up enjoying Charlotte and Alexander more than Jane herself. Charlotte has the go-getter gumption that I like in my leading ladies, and Alexander was appropriately put off but also endeared by her, which I like in my romantic heroes. This all left poor Jane to still have to fulfill the role of the one who falls in love with the very brooding, slightly suspicious Mr. Rochester. Yes, things don’t all turn out as they do in the book, but given the dueling goals of retelling the story while also criticizing some of the peculiarities of its romance, this left Jane in the awkward position of having to mimic some of the foibles (at least they are presented as foibles in this view of the story) of the original Jane as well. But, don’t get me wrong, the book takes a massive turn halfway through the story, and in the latter half Jane gives it as good as she got.

I’m sure this was true of the first book as well, but what stood out to me the most in this one was the bunches of fun I was having simply spotting references to other pop culture memes and moments. I know that “Ready Player One” has come under a lot of fire (I don’t think deserved, save it for the second book!) for being nothing but a loose plot full of 80s references. And while I had fun with that book and those nods, I’m not a pop culture aficionado like Kate, especially not about the 80s, so I’m sure I missed the majority of the more subtle Easter eggs.  Not so here! These are the kind of references that I can get behind. We have “The Princess Bride,” “Harry Potter, ” “Ghostbusters,” “Lord of the Rings” and so many more! They were everywhere, and what made this even better was how artfully they were sewn into the story itself. It never felt like they were shoehorned in, but instead each reference came about in a natural and often very subtle way.

I again loved the way that the authors wove supernatural events into this story. Yes, it’s probably a bit easier to sell a ghost story with actual ghosts for “Jane Eyre” than shapeshifters in a real historical event like with the first book, but there are still a million ways this thing could have gotten away from them. Instead, the entire production felt tightly controlled and masterfully directed the entire time. The characters each had distinct and interesting character arcs, the magic was well thought out and integral to the story itself, and the original “Jane Eyre” was deftly retold and lampooned at the same time. I zipped through this book in one day! If you enjoyed “My Lady Jane” or are up for a good comedy version of “Jane Eyre,” than I definitely recommend checking out “My Plain Jane.”

“My Plain Jane” is on these Goodreads lists: “Derivatives of Jane Eyre” and “Brontës in Fiction.”

Find “My Plain Jane” at the library using Worldcat!