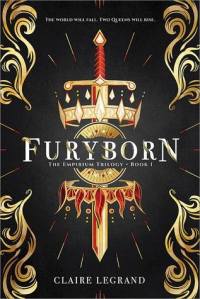 Where Did I Get this Book: NetGalley and BookishFirst

Book Description: When assassins ambush her best friend, the crown prince, Rielle Dardenne risks everything to save him, exposing her ability to perform all seven kinds of elemental magic. The only people who should possess this extraordinary power are a pair of prophesied queens: a queen of light and salvation and a queen of blood and destruction. To prove she is the Sun Queen, Rielle must endure seven trials to test her magic. If she fails, she will be executed…unless the trials kill her first.

A thousand years later, the legend of Queen Rielle is a mere fairy tale to bounty hunter Eliana Ferracora. When the Undying Empire conquered her kingdom, she embraced violence to keep her family alive. Now, she believes herself untouchable–until her mother vanishes without a trace, along with countless other women in their city. To find her, Eliana joins a rebel captain on a dangerous mission and discovers that the evil at the heart of the empire is more terrible than she ever imagined.

As Rielle and Eliana fight in a cosmic war that spans millennia, their stories intersect, and the shocking connections between them ultimately determine the fate of their world–and of each other.

Review: I’m pretty sure “Furyborn” wins the competition for most hyped book this spring. Everywhere I look there are lists including it as most looked forward to, rave reviews, or options to get your hands on it early. So props to the marketing team for getting this one out there. However, as has become a bit of a habit for me with much-hyped books, I had some mixed feelings on this one. Mixed though! I did enjoy this more than “The Cruel Prince” which was my last big letdown from the hype machine.

Most of the things I enjoyed in this story were also directly tied to aspects that I did not. Unlike other books, the problems I had with this story weren’t connected as much to the actual characterizations we’re given or the overall story. Both were mostly strong. But there are writing choices throughout the story that frankly sabotaged the good efforts made elsewhere.

For example, to start out. Both Rielle and Eliana are strong enough characters on their own. They live in very different worlds, and while some of their struggles are similar (trying to find their place in the world & hiding/fighting against perceptions that might set others against them and those they love), they are distinct in their own right. They each have a unique voice, always an important element in shared POV books. I personally found myself a bit more drawn to Eliana. Her story has a bit more mystery (for reasons we’ll discuss later), and as a character, I enjoyed her more morally grey worldview. However, I didn’t dislike Rielle either.

The other side of this coin, though, is the fact that both of these characters feel cut off at the knees by the alternating POVs. It’s not even a complicated problem: each POV is simply too short. The reader is being constantly bounced back and forth between each girl’s story, that one can never really settle into either character or plotline. This results in me kind of just not caring, when all is said and done. Readers need a chance to settle into a character, to really come into their world and understand their motivations and challenges. But when we’re constantly bounced back and forth between two very different stories every few pages, there is never a chance to really get that moment where you become invested. It was a fine read, but it was just that, a read. I never felt like I was really in this world. I was always just reading about it.

This problem extends to the world-building. There’s a lot that needs to happen on this front for a story that is going to try to present two very different worlds, thousands of years apart. The author essentially has to do twice the world-building to successfully pull it off. But, again, because of the quick switches between one character and the other, I never felt like I had a clear understanding of either of these worlds. There are angels in one? But the details are foggy. The other world has a empire that is set on taking over the world, but why and how? These details are all interesting on their own, but it ultimately felt like the author had bit off more than she could chew. Or, at the very least, more than could be reasonably fit in one novel that also has a lot of other things going on.

The action was fun. There is no denying that this book moves, and it was this that got me through some of the failings in my full connection to either character or the world itself. What’s more, I enjoyed that the action was very different between each girl’s storylines. Rielle’s ongoing magical trials were exciting and fast-moving. Whereas Eliana’s were caught up in politics and the violent nature of what the world has become under this ambitious empire. But, again, this same fast-moving action was also part of the reason the world-building and character development felt stunted. There simply weren’t enough pages to fit in all of this action while also developing two fully-realized characters and two fully expanded worlds.

I did  also have one major criticism of this book. I read a good article recently that questioned whether a prologue is ever necessary for a book. The author of the essay mentioned that very talented authors could pull them off (like J.K. Rowling and her prologue in the first Harry Potter book), but even then, did you need them? This book serves as a perfect example where, for me, the prologue actively damaged my perception of the story right off the bat. It’s not long, but in even those few pages, the author managed to spoil almost every single reveal that was to come throughout the rest of the book. I already new the secrets that plagued some of our characters, thus making their confusion and ultimate surprise incredibly uninteresting to read about.

Further, I feel like this prologue was meant to inspire curiosity about how one character ended up where she did. But instead, I felt spoiled for her entire plot and thus her chapters held very little interest. There was no real threat behind any of the things she confronted because I knew where she ended up. If I hadn’t already been losing interest in characters because of the quick jumps back and forth due to the POV switches, this prologue alone did enough to pretty much kill off my interest and curiosity in at least one of these two.

All of that said, there book is still a fairly strong outing in a new fantasy world. There isn’t a lack of action or story, and the characters are interesting on their own. The problems I had were all down to stylistic choices (too short of chapters between switches, an uneven balance between action and world-building, and an unnecessary and ultimately harmful prologue). I’ll probably still stick around to read the next books in the series, however.

Want to judge for yourself? Get your hands on an ARC of “Furyborn” before it comes out! Giveaway is open to U.S. residents only and ends May 10, 2018.

Rating 6: Had some good things going for it, but the author made a few writing choices that seemed to shoot the book in the foot.

“Furyborn” is an upcoming title, but it it is included on this Goodreads list: “Badass YA Heroines.”