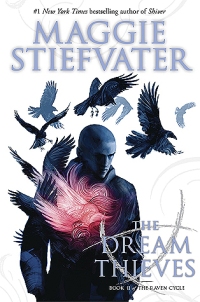 This week we’re bringing to you a special, all-week review series of Maggie Steiefvater’s “Raven Cycle” books. Containing both fantasy and horror elements, we’ve both been independently reading this series, and with the release of the fourth and final book earlier this spring, we thought it was about time to share our thoughts! So each day check in to read our thoughts on the next in the series. To round out the week, on Friday we’ll be posting a more extensive list of other books/series that we recommend if you enjoyed the “Raven Cycle.” Today we review the second in the series, “The Dream Thieves.”

Where Did We Get This Book: Both got the audiobook from the library!

Book Description: If you could steal things from dreams, what would you take?

One secret: Ronan can bring things out of his dreams.

And sometimes he’s not the only one who wants those things.

Ronan is one of the raven boys—a group of friends, practically brothers, searching for a dead king named Glendower, who they think is hidden somewhere in the hills by their elite private school, Aglionby Academy. The path to Glendower has long lived as an undercurrent beneath town. But now, like Ronan’s secrets, it is beginning to rise to the surface—changing everything in its wake.

Of The Raven Boys, Entertainment Weekly wrote, “Maggie Stiefvater’s can’t-put-it-down paranormal adventure will leave you clamoring for book two.” Now the second book is here, with the same wild imagination, dark romance, and heart-stopping twists that only Maggie Stiefvater can conjure.

After reading “The Raven Boys” I wasn’t in the biggest rush to read “The Dream Thieves”. It wasn’t that I didn’t like “The Raven Boys”, because I did. But I wasn’t absolutely entranced by it, as while it was supernatural and supposed to be creepy, it didn’t quite live up to my probably unfair and impossible standards. But then I was looking at the audiobook selection from the library, and I saw that “The Dream Thieves” was available. And not only was “The Dream Thieves” available, my absolutely favorite audiobook reader, Will Patton, was the one who was reading it. So that clinched it. It was on.

So I don’t know if it was the Patton factor or what, but I ended up enjoying “The Dream Thieves” more than I did “The Raven Boys”. Okay, no, I take that back. It wasn’t the Patton factor, as potent and aggressive as that may be. It was because this book focused on Ronan Lynch, my favorite Raven Boy. Ronan is angry and brooding and emotionally unstable, so of COURSE I can’t help but love him to bits. And in this book not only is he given the spotlight, his personality and back story is explored quite a bit, so we get to see why he is so volatile and angry. We find out more about Ronan’s abilities in this book specifically the fact that he can pull objects and beings out of his dreams. Now that Cabeswater’s ley lines have been fully awakened, this ability has become more powerful. He’s taking not only objects out of his dreams, but creatures as well, creatures that aren’t exactly friendly. Along with this he is still affected and traumatized by the murder of his father, a tragedy that has connections to the present day situation with Glendower and the ley line, and to the fact that his mother has been comatose since. So as far as I’m concerned, Ronan has earned any and all of the angst that he’s showing. Along with the angst we got to see a softer side of him as well, not only with his younger brother Matthew, but also with Adam Parrish. Because Ronan is secretly in love with Adam. Which, of course, made me squee like an idiot. Seeing Ronan struggle with his past, his feelings, and his abilities were wonderful explorations.

Ronan wasn’t the only character to be explored more in depth in this book. We also got to see more of Adam and his own connection to the Ley Line and Cabeswater. Adam has always felt inferior to his group of friends because of their wealth and privilege, a fact that has never really been made easier by Gansey, whose good intentions are received as condescending more than kind. Adam is convinced that Gansey pities him and will hold his generosity over his head, and their relationship is heavily strained because of this. And to heap on the baggage afforded to Adam this time around, Blue, realizing she doesn’t share his feelings, dumps him. Sad for Adam. But AWESOME for me! I was worried that we were going to be subjected to this tired and annoying trope for the entire series, but NOT SO!

But Adam’s worth, perhaps unseen by him, becomes far more clear in this book. Noah is a ghost. Ronan is a Dream Weaver. And Adam seems to be a little bit psychic. Which super, super intrigued me going further into this series. That, and the feelings that Ronan has for him. Really for me, “The Dream Thieves” was all about Ronan and Adam.

AHHH, and the psychic women that live with Blue, but I feel like I’ve rambled enough. Just know that Maura, Calla, Persephone, and Orla also get stuff to do in this book, and that they also get depth. Noah gets depth too, and his relationship with Blue gets a very sweet aspect to it. Let’s just say that ghosts don’t need to worry about dying if a girl whose kiss is prophetically deadly kisses them. I loved it. I loved so much about this book.

“The Dream Thieves” was the book that got me fully invested in “The Raven Cycle.” It’s blend of fantasy, the supernatural, and teenage suds makes it a super fun book and really gave the series the oomph I was looking for.

I second everything that Kate said, so I will try and discuss different points than the ones that she has already covered.

First off, the fantasy element is given a big injection of adrenaline in this book. While bits were sprinkled around quite nicely in the first book, that initial groundwork pays off big in this book. Magic is suddenly more than just a mysterious forest that appeared in the countryside. It’s alive and walking around in both Ronan and Adam. Ronan’s dreamer-abilities are so astounding and seemingly limitless. While also completely terrifying, which saves it from feeling like a magical “get out of jail free” card for any future problems. And Adam’s connection with Cabeswater is more complicated than it had at first seemed.

I’ll discuss Adam mostly, since Kate covered Ronan for the both of us. Oh, poor sweet Adam. Nothing is easy for him in this book. His hasty deal with Cabeswater comes with more strings attached then he had expected. And I loved the parallels that were drawn between the darkness that was imposed on this connection because of a lack of understanding on Adam’s part of what exactly it was that he agreed to. Looking life in the eye, looking one’s own flaws in the eye, and finding that clear-eyed honesty, while terrifying, is important to growth. Adam’s personal history is tragic, and I appreciated the honesty with regards to the effects that this would have on Adam’s life and ability to form healthy relationships around himself. His friendship with Gansey is pushed right to the breaking point and made me want to cry for them both. They were both just TRYING SO HARD and still not able to truly communicate their feelings.

And, importantly, while it is noted that nothing that had happened in Adam’s family life was his own fault or deserved or in any way not awful, I appreciated the fact that Adam wasn’t let off the hook for his own bad behavior. It’s completely understandable why he is the way he is, but Blue’s reaction to him behaving very poorly was so appropriate and something that Adam needed to go through to really gain self acceptance (not that he’s there yet, but there were steps).

This tied into my concern from the first book about the love triangle. There is no love triangle! Thank heavens. Just a natural, teen romance where you can fall equally out of interest as you did in, and that’s all ok. Blue is sad that she doesn’t feel as Adam does, but she’s honest with herself and, eventually, with him as well. There’s no dramatics, other than usual heartbreak, and both determine that their short lived romance can be turned into friendship with a little work. And Blue doesn’t suddenly fall head over heels for Gansey either. It is clear that they are both becoming more aware of their own feelings, and, in Blue’s case at least, this comes with a lot of adjustment needing to be made to her original judgements.

I also can’t end this review without mentioning Kavinski. Want to talk about a complicated, heart breaking story? Ronan’s angst and inner struggles are so perfectly paired against this completely new character (can I just say how impressed I am by Stiefvater’s abilities to manage so many characters and give them all so much depth in so few pages??). Kavinski is what Ronan could so easily have been without his friends and it is heartbreaking. Even as Kavinski spirals out of control, you can’t help but feel a deep ache for him.

I was already enjoying this series with “The Raven Boys,” but this book really sealed the deal for me!

Kate’s Rating 8: All of the characters are back and better than ever, and Ronan gets some back story and some delicious brooding time and cool magic. A great fantasy read.

Serena’s Rating 8: Very strong second showing. The fantasy elements were great, and the increased focus on complicated character like Ronan and Adam was appreciated.

We’ll include a detailed Reader’s Advisory post for the whole series on Friday!

Find “The Dream Thieves” at your local library using WorldCat!